Danger, Will Robinson! The faint of heart should turn back now!

This article allows you to peek behind the curtain of the SCA awards process and breaks it all down into (gasp!) math. But for people who are aspiring for an award, seeing data on  number of awards given or average times to achieve it may be depressing if they are past that time and somehow "behind schedule". Keep in mind that half the people will take longer than the median and that there truly is no schedule or deadline. Awards are supposed to capture when you reach a particular level of excellence in your field - not when some arbitrary number of years have passed.

See my other articles on the SCA awards process for more thoughts on this topic:

As a Aerospace Engineering Ph.D., I like math and statistics. For many years, I have had a spreadsheet of the Atlantian Order of the White Scarf (OWS) members and what other awards we hold. This was to see how well rounded we are. Later, I added pages to my spreadsheet to track data on the Order of Defense.

Almost all of this data comes from the publicly accessible Atlantian Order of Precedence and clicking on the names of every member of the Order of the White Scarf and the Order of Defense.  The exception is data on people's genders, which is all my personal impression/best-guess. For that reason, I will not be sharing the spreadsheet with the complete raw data. If there is interest, I might at some point share it with the gender column deleted.

This article is intentionally dry and unemotional. I am trying to present data to use as a starting point for discussions. I do have opinions on where there are issues and ideas on trying to address them, but I will share those in another forum where more people can discuss the topics.

Counts of other awards received

My initial motivation for building the spreadsheet was a discussion about how much service was appropriate to expect from a OWS candidate. I wondered how many people had received the different Kingdom service awards at the time of their OWS recognition. I did not track awards in other martial disciplines other than the Kraken and the Chivalry.

Over time, the OWS members received other awards. This is the current status as of the update date listed at the top of the article.

Other Awards the OWS recipients currently have

Similarly for the Order of Defense. Note that this chart, and the Atlantian OP, lists two Masters of Defense that did not receive their MoD from Atlantia. Those two people will not be included in the gender counts later in this article.

So far there isn't a lot of difference between that and the current award counts:

Other Awards that the MoD recipients currently have

One measure of how hard it is to receive an award is how long it takes to receive it on average. Note that in this case, the creation dates of the three awards is having a huge effect on these numbers making for some strange seeming results. Only the people who have both awards are considered in the timing.

Time between awards for MoD members, only 15 of 27 have Sea Dragons

You might expect the average time from Sea Dragon to OWS plus the average time from OWS to MoD to equal the average Sea Dragon to MoD time. But, they clearly do not because each of the measurements covers a different group and number of people.  For instance, many of the older fencers received their OWS before the SD existed or it was created after it was an appropriate award for them and then had to wait around for the peerage to exist that they would otherwise have been added to years earlier. As time goes on, I expect that the time-between data will gradually be more consistent.

Gender is a very touchy subject. I am a middle-aged, cis, heterosexual, male, so I have limited insight beyond reading and discussions with multiple cis-female, trans-male, and trans-female friends. I talked with a couple of those friends before taking a stab at these statistics in order to try to pick the clearest, most concise, way to define and present this data. What we chose was to add a column that was basically yes/no for "currently identifies as male". For this purpose, "no" includes women (cis- and trans-), non-binary, and any other gender minority.  Then, I went down the award rosters and said yes/no based on my own impression. I am certain that I did not get this 100% right, so to avoid embarrassment and possibly outing people who are not public with their status, I will not be sharing that portion of the individual data at any point. Note that people who received their awards outside of Atlantia (OWS and MoD) are not counted.

To get a more complete picture it would be helpful to have data on the gender ratios of people at the pick-up-a-sword-for-the-first-time and the authorization stages. I don't currently have a good idea on how to generate that data.

There have been much more involved studies on rapier awards and gender performed by other people that I strongly recommend:

The question of how the rate at which we are recognizing people with OWS and MoD awards compares with the rates for other disciplines came up. So, I did a different pass through the Atlantian OP and counted the number of awards of each type that each pair of Royalty awarded. This data was collected on May 3, 2020, so does not include any awards made since the pandemic shutdown. Nor are the significant number of non-armigerous, but still meaningful, awards considered in this count.

At the time of collection, the Order of Defense was 5 years old. The upper chart goes back to the first reign that awarded it. The second chart drops the first two years of the Order of Defense existence to try to eliminate the initial burst and capture a more steady-state rate.  Please, please, do not use this data as an expectation for any particular reign. The raw data shows a lot of differences between reigns!

That's a lot of great work being recognized with a lot of awards!

This is quite an eye chart. Let's zoom in on a few rows or columns at a time. We'll start with the fencing row.

Over the last 6 reigns counted, there were 36 AoA level rapier awards given, 16 GoA Awards (about half the AoA number), and 8 PoA Awards (again half the GoA number). This ratio of halving at each higher level seems to be fairly consistent across the disciplines.

Note that archery and equestrian do not currently have a PoA award for excellence (they sometimes will get Laurels and Pelicans for related work, but not for actual skill in their sport.)

The second set of columns shows the percentages out of all awards. The Sea Dragon is 5.5% of the AoA-level awards given and overall, fencing awards are 5.9% of the awards. Looking at the bottom center section, AoAs are 64.7% of all awards, GoAs are 24.2%, and PoAs are 11%.

And the right most set of columns shows that on average 10 fencing awards are given each reign, with 6 being Sea Dragons, just under 3 White Scarves, and just over 1 Order of Defense. 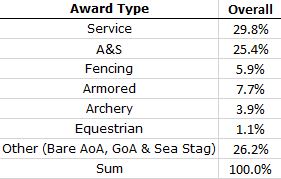 This shows the distribution of awards by discipline. About 30% of all armigerous awards are for service. Fencing gets about 6% of the awards, armored about 8%, archery about 4%, etc. Obviously, the missing detail from this chart is the size of the pool of people who are eligible for each type of award: how many fencers are there relative to the number of armored fighters, archers, arts folks, etc.? I don't know a good, consistent, way to measure this.  Active authorization numbers could be used to estimate the pool sizes for the combat fiends, but every active SCA participant is in the pool for service and almost everyone is doing something that could be considered for an A&S award. Is paid memberships a good guess for that pool? I don't think it is ideal. But my mental picture of the participation level in each activity does not see any huge problems with the distribution in this chart.

Note that the Sea Stag is counted in my "Other" row. It is an award for excellence of teaching of rapier or armored combat, so could arguably be counted in those categories which would move the numbers around, but only a little. (An average of 2.5 Sea Stags are awarded per reign.)

My friend, Count William of Fairhaven, has been doing similar data analysis for Middle Kingdom awards. He posted some preliminary data to Facebook and we've had several chats about how to estimate pool sizes and how to compare data across Kingdoms. I've suggested a web page for his data so that people can examine it in more detail and I can link to it. 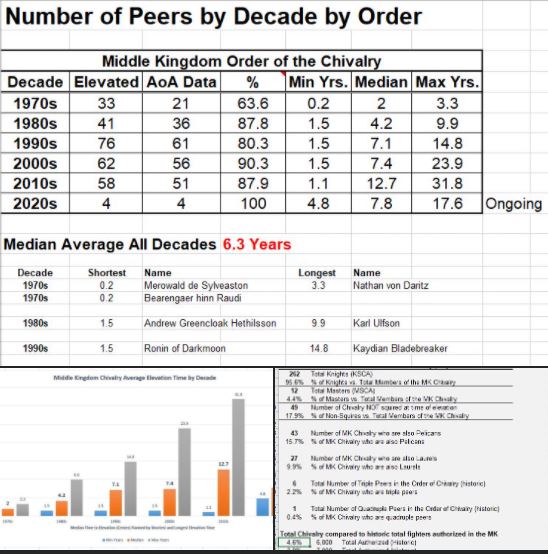 Some of Count William of Fairhaven's Data on Middle Kingdom Awards

Let's have some discussions about the data, any suggestions for improving the data, what other data would be of interest, and how do we generate it?

Much more importantly, what problems are illustrated by the data and what can we do to address those problems.?

Most of those discussions will be appropriate to have in public, open, forums. A few may be more appropriate for the private OWS and MoD mailing lists.

Let's work to suggest ideas, try options, track results, and hold ourselves accountable to keep working and changing to fix the problems. We won't fix things overnight and not everything we try will work. But we need to try, check if the data indicates success or failure, change or double down and repeat.

I created this section as an adhoc ideas/wish list of data that I would like to have or that people have suggested to me. If you have ideas or other requests, let me know. If you want to try generating your own data for a related project, go for it! I am not in anyway an official and exclusive data owner, just a long term fencer who cares about the health of our organization, our sport, and our participants.